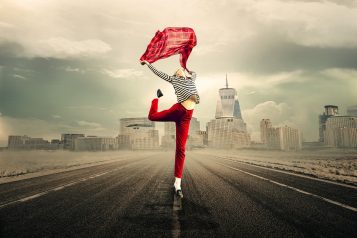 My medical notes are piled high on the consultant’s desk. Complex, is a very mild way of putting my mental health history. In fact I was even used as a ‘demonstration’ at Southampton University, giving talks to psychology students about my experiences, to help them with their studies.

I shouldn’t really be here at all, if my prognosis is anything to go by. Once you go above a certain threshold; a number of relapses, numerous and mixed conditions, unresponsive to therapies and medications, you get put into the ‘chronic’ category where one is destined to be in and out of hospitals and treatments before dying prematurely either through physical complications like heart failure (from eating disorders) or suicide.

This blog was originally published on Mumspiration, click here to read it there.

But despite the serious nature of mental health illnesses and the degree to which I struggled, I’m here to tell the tale, stronger than ever, and hopefully by sharing my story I can inspire and give hope to others suffering behind an ‘invisible’ illness that has no proven cure.

I didn’t see the eating disorders team for the first time until I was 18, but the first time I made myself sick I was only 12. I was diagnosed with depression alongside anorexia, but I’m pretty sure the recurring headaches and sick bugs I got as a child were my way of expressing this. Children aren’t able to make clear how they feel mentally, so often childhood mental illnesses manifest in physical ways. The blood tests when I was 8 showed up nothing, so the doctor said it was for attention. He was probably right, in a round about way; after all my parents had got divorced and remarried recently, all big changes for a young child.

I did my best to control my own discontent, dabbling in everything from painkiller abuse to self-harm and had borderline OCD. I was sectioned and have resided in no less than 4 different psychiatric hospitals, often for months at a time. I attempted suicide twice.

Then one day, a sunny spring afternoon when I was recently out of hospital and having a diet coke with a couple of friends in the local pub garden, I felt an overwhelming sense of loneliness. One of my friends told us she was pregnant, the other that she was now engaged to be married. It was a tuning point; I was being left behind in this thing called ‘life’ and one thought remained…that I wanted to have a little baby girl of my own one day.

The journey upwards was tough, really tough, and I have so much respect for anyone who has overcome mental difficulties as I know how hard it is. But this time I really wanted it, and now I stay pretty well, and medication free, with a strict regime of my own medicine, as I’ll describe below. I even managed to get married and have not one but two miracle little girls of my own.

At first they’ll look too simple. Normal, everyday things that are good for everyone surely?

Well yes, but for me they are a must. The following list is my daily medication and I absolutely must do them to stay well. I will take my own snacks on outings, be late for social events if I needed a few minutes ‘me time’ before going out, and make my kids walk, moaning, in the rain if I have to.

Being selfish and putting my mental health first is the only way I stay well, and if that means being a bit stubborn so that ultimately I can be a better Mum, wife, daughter, sister and person in general, then so be it.

Here are my 10 absolute must-do’s for staying mentally well and happy:
1. Sunlight
Sunlight boosts serotonin, the ‘happy hormone’. It also boosts vitamin D, which in turn boosts energy and mood.

2. Fresh air
This goes hand in hand with sunlight, but is a separate mood booster in itself. As my Mum says, let’s go and ‘blow away the cobwebs’. I’m more of a fan of warm and dry than windy, personally, but I agree with windy days being invigorating when you’re stuck in a warm stuffy house in Winter.

3. Walking
If you’re going to get fresh air and sunlight you may as well walk at the same time and get some exercise benefits too. The rhythmic nature of walking is thought to be why it’s an active form of meditation. Bonus points for walking in nature like parks and woodland; greenery is highly beneficial to your mood. We walk to school in all but the most dire of weather, and enjoy a little chat on the way too. It’s lovely time between the girls and I when at home there’s always chores to distract me.

4. Exercise
In addition to walking, formal, intense exercise is my daily therapy. I use workouts like some use a literal punch bag; pounding and pushing the stress away. It’s also highly effective in short bursts when you’re feeling wound up – a few jump squats can be as good as counting to 10 when kids wind you up!

5. Good food
I learned the hard way, though being very ill with anorexia, how lack of nourishment will ruin not just your body but your brain too. Food isn’t the enemy; it’s life giving when you eat well. A happy brain needs nourishments and nutrients. Positive eating yields positive mental energy. Don’t make it complicated; less junk, lots of fresh fruit and vegetables, minimally processed food, good fats and plenty of protein.

6. Sleep
Less than 8 hours and I can already feel the effects. Less than 6? I’m a nightmare. Yes we’re all busy. But trust me on this one you won’t be losing time if you prioritise sleep, because you’ll be that much more effective in getting things done when you’re awake. I’m in bed reading by 9pm if I can help it.

7. Meditation
Like sleep, condensed, meditation is a way of calming your body and mind and is proven in scientific studies to be highly restorative for both body and mind. If like me you’re hopeless and quieting your monkey-mind, use an app like Headspace which guides you though the process. Just 10 minutes daily is beneficial.

8. Fun
As a working Mum I don’t get much time for socialising, so I make sure to prioritise the things I really want to do and people I really want to see. That means saying no to endless coffee mornings and drinks at the pub, but I’m fully there and 100% happy when it matters, whether that’s giggling over some trashy TV with my husband a couple of nights a week, or drinking tea and chatting to my Mum on a Sunday afternoon.

9. Hugs
Hugs instantly boost oxytocin levels, which heal feelings of loneliness, isolation, and anger. Air kisses don’t count; when I need a hug I’ll turn to my husband and kids, and we all feel better immediately.

10. Priorities
I’m a perfectionist and driven, and typically want to do everything, now! But that only leads to overwhelm. Some things just don’t need doing (ironing?!) and others can wait because today is full enough. Not rushing to cram as much as possible into each day, and instead taking time to think and reflect and just be in the moment, was one of the biggest and most profound mindset changes I made last year. I’ve never felt more at peace without the feeling there’s always the next opportunity to chase.

Have you overcome or are struggling with mental health problems? Come and join in the conversation and get support in my Free Facebook Group Here.