Why eat Jerky or Biltong?

Protein is absolutely essential for muscle repair and growth, especially for those who exercise often. Weight training creates micro-tears in the muscles that need to be repaired, while endurance sports like long-distance running cause muscle breakdown from gluconeogenesis because a large amount of calories are burned.

This is common knowledge in the fitness world, but many people don’t realise that protein and the amino acids that form it are essential for so many bodily functions including metabolism regulation, immunity, blood clotting, fatty acid transportation, oxygen storage and collagen formation in joints.

In short, you can’t live without protein!

Unfortunately, fresh meat, fish, eggs and dairy products can’t be left out of a refrigerator for long before they start to go off, so long-life protein foods can be convenient when out of the house working or away from a fridge all day.

Not everyone enjoys using protein powders and some people may be looking for a change, so dried meats like jerky are a great option.

What’s The Difference between Biltong & Jerky?

Both Jerky and Biltong are dried meats that are preserved to prevent them from going rotten. Biltong is originally from South Africa, whereas Jerky originates from North and South America.

Jerky is simply dried meat, usually for around 2-8 hours, and sometimes has marinades, salt, vinegar, sugar and spices added, but doesn’t always. The drying can be in an oven, dehydrator, smoker, sun dried, or air dried. Jerky is sliced first before drying, and even minced meat can be used. The resulting product is thinner than biltong. Brands of jerky can taste wildly different depending on the methods and additional ingredients used. In fact the name ‘jerky’ can also be applied to other dried foods such as fish, mushroom, soy, poultry and other meats such as bacon.

Biltong has a much more specific method applied; it is air dried for anywhere between 3-7 days, and is doused in vinegar and rubbed with salt, as well as various other spices. Biltong is always dried as a large chunk of meat, and is always whole meat, sliced afterwards, and is usually sold as thicker slices than jerky. Due to the more stringent production methods, it will have more similarities in taste between brands. Biltong is always made from red meat. 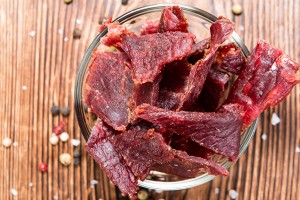