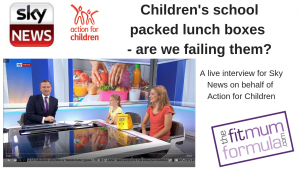 In a back to school special earlier this year, charity Action for Children set out to help parents improve their kids lunch boxes, and asked me to help.

As a parent myself it’s a cause I care about – kids need good nutrition to have energy, learn, grow and behave well. Yes the studies even show conditions like ADHD and Autism are improved when diet is improved!

But most parents know that already. The problem is getting your child to eat a good meal in the middle of the day that they won’t reject. Kids tend to favour sweet and processed foods, so how do we create a win win situation?

The charity Action for Children are on a mission to help parents improve kids’ lunch boxes and set out to do some research:

I was invited onto Sky News as they were covering the story  to talk about the issue live on air with my 9 year old daughter Aurora in tow (she did such a good job and I was so proud of her!): Here’s the clip if you missed it (or here on YouTube):

My local radio Spirit FM (as well as many National radio stations) also covered the story here using my words below.

Or listen to the full compilation of soundbites with my views on what we can do about kids’ lunch boxes my clicking on the video or here on YouTube.

“Children can be notoriously picky eaters – they do have a preference for sweet foods and they will go on hunger strike. I disagree with people who say if children are given no other option but healthy food, they’ll eat it. I’m a nutritionist and if I can’t get my children to eat lentil spinach salads then I don’t know how anyone else is supposed to be able to. If they don’t like what they’re given they won’t eat it. If that happens at school they won’t be able to concentrate, they’ll be falling asleep in class and they won’t have the energy to take part in sports.

“I think it benefits everyone, not least the children, if they’ve got a full belly. The easiest way to do that is to give them food that you know they love and you know they’re going to eat. Children being children, that’s going to be the sugary junk foods. that’s why people do it; it gives everyone an easy life.

“But healthy eating doesn’t need to be complicated. Children can eat things that are very familiar to them but also nutritious such as swapping processed cheese for mild cheddar cheese or cocktail sausages for sliced ham off the bone. Instead of giving them a packet of crisps it could be plain breadsticks that don’t have loads of added flavourings and salt and sugar. I don’t know many children who won’t eat some sort of fruit and vegetables, even if it’s just a couple – maybe blueberries or cucumber sticks. If that’s all they’re going to eat, it’s better than nothing.

“Children are creatures of habit and they tend to prefer routine. They probably prefer it if you give them exactly the same thing to eat every day . It’s familiar to them and it taps into that safety net – they understand the food and they know it’s safe. Variety doesn’t tend to be a problem for them.

“It’s about making compromises. They may not like granary bread that has loads of seeds in and tough crusts, but they might eat a wholemeal wrap that’s a bit softer and easier to eat. I can’t shove salad into my kids’ sandwiches but a few slices of cucumber might be ok or some cherry tomatoes chopped up. There’s lots of options out there. I think people make it more complicated than it has to be.”

Parents need the knowledge and confidence to give their child the best start in life when it comes to nutrition. Anyone in need of inspiration for packing a fuss-free healthy lunchbox that your child will want to eat can visit //actionforchildren.org.uk/lunchbox.”

Registered Public Health Nutritionist Mari Clark, who designs menus for Action for Children’s Eat Better, Start Better service, says: “Through no fault of their own, many parents simply don’t know exactly what their child needs. This isn’t helped by confusing packaging that has pictures full of fruit and happy children, when the products inside are packed with sugar and fat and salt.

“There is no need for any lunchbox to contain crisps, sweets, processed food, cereal bars, chocolates and things like that – if you have sandwich with some good quality protein, a portion of fruit, veg and dairy then that’s enough.”

(1) All survey figures, unless otherwise stated, are from YouGov Plc.  Total sample size was 4348 adults, of which 535 are parents with children aged 5 to 13. Fieldwork was undertaken between 8th – 10th August 2018.  The survey was carried out online. The figures have been weighted and are representative of all GB adults (aged 18+).

HOW ACTION FOR CHILDREN WORKS: Action for Children helps disadvantaged children across the UK through intervening early to stop neglect and abuse, fostering and adoption, supporting disabled children, and by campaigning tirelessly to make life better for children and families. With over 550 services the charity improves the lives of more than 300,000 children, teenagers, parents and carers every year. Actionforchildren.org.uk